Enceladus is the 6th largest moon of Saturn, and is located about 10 astronomical units away from the Sun. Hence, Enceladus lays far off the “habitable zone” –the zone where evolution of life is possible. However, when searching for extraterrestrial life, this moon, which outer shell consists of several kilometres of water ice, becomes more and more into the focus of attention. Since the spacecraft Cassini provided some interesting details about Enceladus:

· At least at the south polar region an ocean beneath the ice mantle exists.

· Also at the south polar region, active geysers demonstrate that the moon is geological active and must therefore be much hotter in its core than scientists had expected.

· Organic compounds exist among the gushed particles of that cryovulcanism.

Regarding these findings, there exist a possibility that extraterrestrial life in terms of microorganisms developed in the subglacial ocean of Enceladus. The Enceladus Explorer Initiative (EnEx), which was initiated from the DLR, has the purpose to investigate on that possibility. Therefore, the goal of this project is, to realize a spacecraft landing on Enceladus followed by sampling of water which is trapped within cracks of the ice shield. 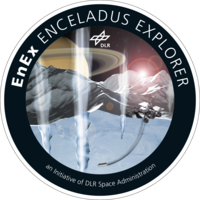 An existential task of the project is, to precisely locate and telecontrol the so called IceMole, a meltdown probe for sampling on Enceladus designed by the FH Aachen. The Bergische Universität Wuppertal has already developed the location of such a melt probe in glacial ice using acoustic triangulation.

Another main point for the successful implementation of the EnEx mission is to choose a suitable landing spot. To ensure that, a sub-project which is in cooperation with engineers from the Friedrich-Alexander-Universität Erlangen-Nürnberg get started to develop an image system for glacial crevasses in astrobiology for robots based ice exploration (EnEx-AsGAr). Therefor radar imaging methods will be compiled, in order to map the surface structure of the moon as well as to detect water filled cracks within the ice near the surface. The principle of a Synthetic-apertur radar (SAR) thereby provides the facilities for both requirements, which is high-resolution remote sensing from the orbit (before landing) and close-up range imaging (after landing). A special challenge is thereby, among others, that the dielectricity, hence the propagation speed of the radio waves in ice, depends on parameters such as salinity, density, pressure and temperature. As those parameters are unknown on Enceladus, a model of presumable settings on Enceladus which relies on investigations of terrestrial ice must be evolved. To additionally determine the dielectricity on-site, we like to develop an in-situ measuring procedure using reference targets. With the help of a neural self-learning method, which is based on new SAR-algorithm, the icy subsurface on Enceladus should be exactly reflected, despite effects of refraction at boundaries.

In order to test the required hardware as well as the developed system, two field tests on glaciers are planned within the project.